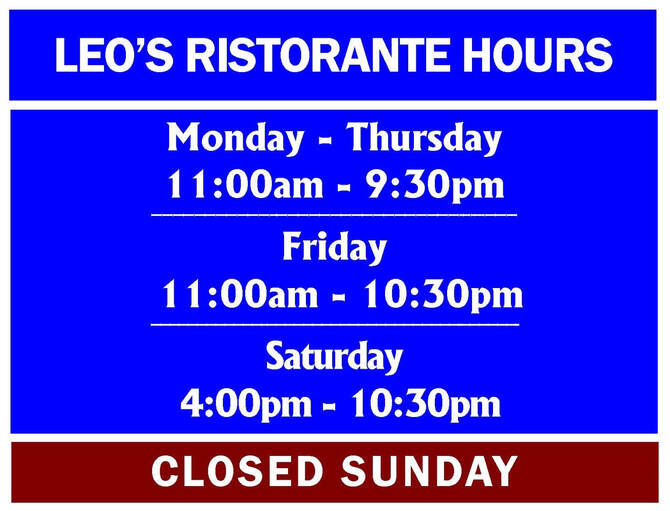 In 1930, not long after their journey from Italy to America, Pasquale "Patsy" and Louise Strollo moved to Youngstown, an area rich in Italian heritage, customs, values, and traditions.  With their passionate love for Italian cuisine, the couple opened a grocery store on Youngstown's East Side. Years later, Patsy and Louise opened
a restaurant in Lakeland, Florida.

The roots of our family's passionate love affair with food runs deep.    Patsy and Louise had a compelling influence on their four children.  This influence was especially strong on their first daughter Francesca (Fran).  Fran married Leo DelGarbino, a man who also came from an immigrated Italian family, and shared the same enthusiasm for Italian food as she did.  In 1968, Fran and Leo opened a small pizza shop in Warren's West Side called PARKMAN ROAD DAIRY.  This quaint pizza shop soon became an institution in the community.  It was here that Fran and her mother Louise collaborated to create Leo's ORIGINAL WHITE PIZZA, an old recipe turned new.  The saying 'history repeats itself' is especially true in this family.

The torch was once again passed when Fran and Leo influenced their infatuation for food to their four children, but particularly to their son Leo Jr., a Culinary Institute of America (CIA) graduate.  In 1982, Leo Jr. and his parents decided to broaden their horizons when opening a small restaurant in the Market Place of Warren, which they called LEO'S RISTORANTE.  Here, Chef Leo combined his new innovated techniques of food presentation and preparation with old family traditions of regional Italian cooking.
Chef Leo's creations were the talk of the town, and instantly Leo's Ristorante
became a staple of Warren.

Due to the overwhelming growth and popularity of the restaurant and the on and off premise catering, the family had no choice but to expand again.  Keeping things
family oriented, Fran's brother, architect Larry Strollo, designed the NEW building
LEO'S RISTORANTE AND BANQUET CENTER at this current location.
Just as in the past, the tradition and passion for great food lives on.

At the forefront of his siblings, Leo Jr., along with Marc and Frankie, are both involved in cooking and management. Leo's daughter, Arianna DelGarbino, also a CIA graduate, is an instrumental asset with her preparation techniques and creative forms of presentation that represent a seasonally changing menu.  Leo's wife, Lisa, takes the reigns as the restaurant's event planner. The group together continues the family legacy.  The chefs of today blend in the tried and true ways of yesterday to create  the succulent cuisine of tomorrow.   Being the oldest grandchild of the fourth generation I can tell you that walking through the doors of Leo's, one feels the warmth and fragrant aromas of my father's kitchen.  Tasting all of the magnificent dishes passed down through generations
is truly a culinary delight.

The best and freshest ingredients made freshly and specially for you...

Call for reservations now to get immediate seating !